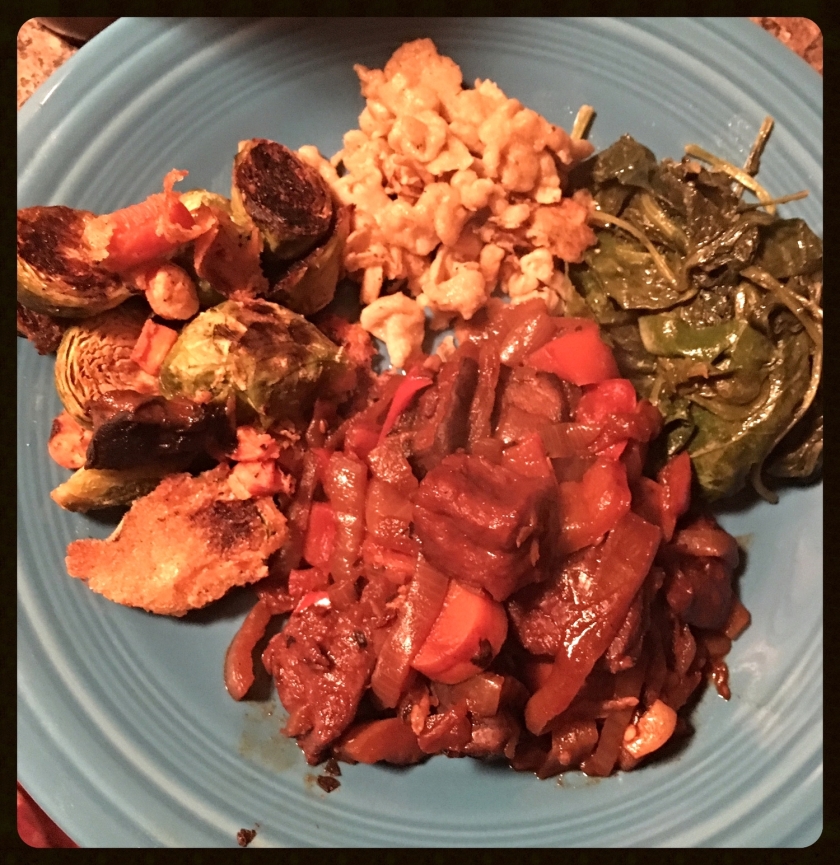 Once upon a time, many years ago, I worked my first real job in an German/Austrian Restaurant in the middle of the most rural part of New Jersey. You would think that something like that wouldn’t last, but it thrived for many, many years before and after my time there, perhaps because of his relationship with local hunters, or perhaps just because the food was good and homey.

I made desserts and salads and cold appetizers. I am friends, to this day, with a guy I met there whom I used to get in shrimp vein fights with (we’d devein the shrimp and then wipe it on each other, ew.) I started a 5+ year relationship with a man I met here, also still a friend, who I awkwardly watched the boss tell to “Give me the WEINER! I need the WEINER! (As in, WEINER Schnitzel.) I think of the old boss every time I make a cake, especially one with booze in it, and I learned that the best way to decorate desserts is with edible flowers. I learned that tiny strawberries reminded me of my dog, and that a really good way to tease your friend is to rub shrimp veins into his arm hair (but you’ll get paid back 2-fold.) I learned that sauerbraten gravy is a mysterious, wonderful concoction.

I learned that in a restaurant like this, meat is king. At the time, I still ate meat, but I can’t think of anything, besides the salad, that had any green in it.

One of the things on the menu that wasn’t made of meat, was a weird little pasta called Spatzle. Teeny tiny blobs of pasta, that we served with the sauerbraten- or was it the weiner? I can’t remember. It was mostly bland, but slightly nutmeggy, and sucked up the sauces wonderfully.

Spatzle is not only an Austrian thing, its also made in Hungarian cooking. When I decided I was going to take on Beef Goulash, I knew I was going to have to incorporate Spatzle into it too. And I’d have to do more research; I can “wing” veganizing a meal, until there’s eggy dough involved. I didn’t want to waste my time, or my money, or make a mess that produced no results, so I had to do a little research before beginning my spatzle dough.

I served this with a side of baby kale with little lemon, oil, and mustard, and some rice flower hot sauce crusted brussels sprouts. recipes below.

I was really scared making the goulash.  I was combining a few (meaty) recipes and altering some things, and I thought I made a big mistake using so much wine. Some recipes had all wine and some had some broth and I wanted a bold, hearty flavor so, I went all wine. At one point I checked the broth as it was cooking (and had been cooking for awhile) and it tasted like dirty wine. Be patient, this will go away. Also, a cup of paprika sounds deadly (like, how many times have you ever used more than a tablespoon of paprika?) but I promise you, in the end it will not disappoint. The vinegar at the end balances everything out. IF you think at the end its missing something, add an extra little bit of vinegar.

One more note: I cook on sundays for the house to eat for the whole work week. You can easily halve these recipes.

The majority of this preparation is inactive, and can be done either in a dutch oven in the oven, or a slow cooker. Either turn on your slow cooker, or preheat your oven to 325 degrees Fahrenheit.

Heat the oil in a large dutch oven (or a pot if you plan on using a slow cooker later.) Add onions and peppers and stir occasionally, for 15 minutes. In the meantime, brown mushrooms in a pan and set aside.

Add paprika and caraway seeds to the onion mixture, and stir for 3 minutes. Now add wine, carrots, seitan, salt, and mushrooms, mix to combine, and bring to a boil.

Once it boils, cover the dutch oven and place inside the oven (or, transfer to slow cooker) and cook for 3 hours.

Scoop out a half cup of liquids, and mix with corn starch. Mix back into the pot, and add vinegar. Return to stove top and bring to boil, then turn off heat. If using a slow cooker, cook for 5 more minutes instead of returning to stovetop.

Mix milk, flours, salt, nutmeg, and pepper together, once combined, mix for an additional 3-5 minutes, or until glue like in consistency. Cover with a towel and allow to rest for 20 minutes.

Boil large pot of heavily salted water. Have a colander nearby. With clean hands and a large slotted spoon (a box grater on its side (the side with the biggest holes)  works ok in a pinch too. Working in batches, push dough through the holes of slotted spoon/box grater into the boiling water. It will fall in in blobs. When the small blobs begin to float, scoop them up with a clean slotted spoon and dump into colander. Continue until dough is all cooked.

Spätzle is ready to go at this point, but if you’d like, you can brown it a little in some oil or cooking spray.